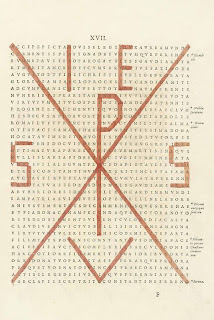 ... a word poem, in which figural images were superimposed onto the grids of letters, to form a religious image. The genre was popularized greatly by Porphyrius, who at the end of the fourth century produced a series of poems for the first Christian Roman Emperor, Constantine.


PS: These are NOT Greek pattern poems or Concrete poetry.
PPS Photos are from the British Library manuscript archives.
Posted by Egidija Čiricaitė at 14:47