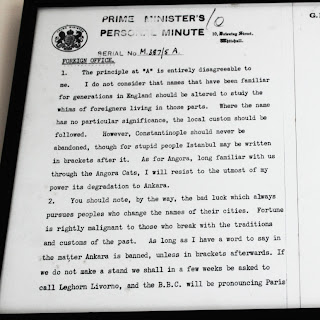 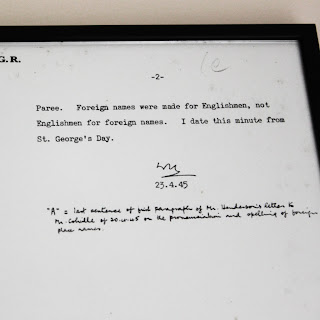 On Sunday we ended up at Chartwell - Churchill's home since 1920.
"This must be very good" I thought, as we fought our way through the coachloads of anglophile French and Japanese tourists as well as WI groups from the shires. The house was so full, one could only trail like an ant in a very English orderly line along the marked route. I was only pleased that NT failed to cancel our membership last week and we did not have to pay for the experience.
On the positive side, Churchil's studio was almost empty and much more interesting too. Especially the letters at the end.
Here is one on the foreign names:


1. The principle at “A” is entirely disagreeable to me. I do not consider that names that have been familiar for generations in England should be altered to study the whims of foreigners living in those parts (true, we call England Anglija, Poland Lenkija and Germany Vokietija). Where the name has no particular significance, the local custom should be followed. However, Constantinople should never be abandoned, though for  stupid people Istanbul may be written in brackets after it (competing with Prince Phillip in rhetoric?). As for Angora, long familiar with us through the Angora Cats, I will resist to the utmost of my power its degradation to Ankara.
2. You should note, by the way, the bad luck which always persues peoples who change the names of their cities   Fortuna is rightly malignant to those who break with the traditions and customs of the past. (auch. Think of all the Eastern Europe towns that have been named and renamed at least twice in the last hundred years: local names, Nazi names, Soviet names. So how come, it is Greece and Spain who are in so much shit now?) As long as I have a word to say in the matter Ankara is banned, unless in brackets afterwards. If we do not make a stand we shall in a few weeks be asked to call Leghorn Livorno, and B.B.C. will be pronouncing Paris Paree. Foreign names were made for Englishmen, not Englishmen for foreign names (indeed). I date this minute from St. George’s day.


Here is another note: 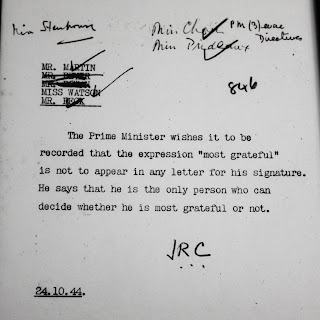