Beavers: happy tea drinking critters with testicles to die for. 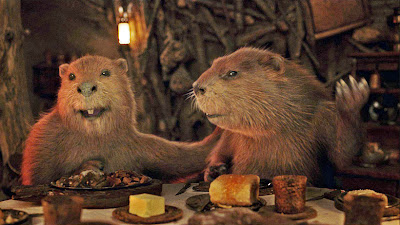 Beavers are so misunderstood. Common fiction draws them as happy tea drinking critters who build lodges among serine banks and woods and rolling meadows. In reality, they are cat sized water rats who leave no tree standing or a daisy blossoming above the water within 20-30 meters of their lodge. I know that because they are gnawing on my woods and they are flooding my meadows. 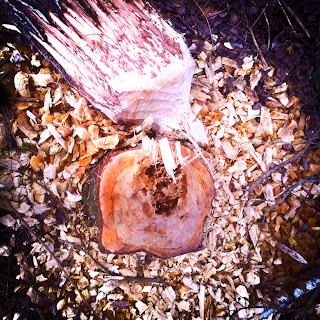 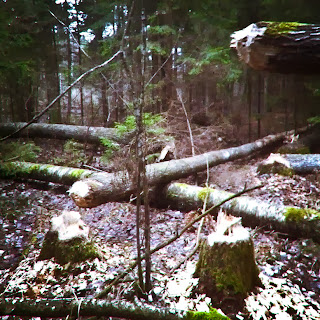 Beavers have been misunderstood for a while. In middle ages they were pictured dog-size or larger. Beaver testicles were believed to have had medicinal properties; as a result, they were heavily hunted. Manuscripts often feature a hunting scene from the fable, first recorded by Aesop in the 6th century, where


beaver, a four-footed animal that lives in pools, knows that he is hunted for his testicles, which are used to cure ailments. When pursued, the beaver runs for some distance, but when he sees he cannot escape, he will bite off his own testicles and throw them to the hunter, and thus escape death (...)


I could not find much information on the use of dog-like and beaver-like images, but it seems that dog-image dominated the hunting scenes in relation to the fable, while beavers remained beavers elsewhere. Here is an image of beaver in marginalia.

Here are two later images of beavers from the 16th and 17th centuries.

Beavers are also found surprisingly extensively in heraldic emblazons from the Middles Ages, with both dog-like and the beaver-like images used. A good compilation of various emblems can be found at Heraldic Beavers in period and in the S.C.A.


The heraldic beaver is drawn with a stocky, smooth-furred. . .body, a wide (usually, but not always, paddle-like) tail, and small or nonexistent ears. It is sometimes contorted into an unspeakable posture based on the medieval view of this animal's habits. . .Some heraldic beavers did not resemble naturalistic beavers .


Contemporary depictions of beaver are abundant in children's literature. Beaver stands in line with Mr. Ratty and Mr. Toad as a cute pet of the English ponds from the innocent times passe.

However - on July 18th 2013 the first wild beaver living in England for more than 500 (Telegraph) or 800 (Independent) years is believed to have been spotted by a woman walking her dogs in Devon. With good wildlife conservation, beavers should not take long to establish themselves (they are doing very well without any conservation efforts out here).
In ten years or so, the few English trees that have been spared by the industrial revolution will be reduced to sharpened stumps. 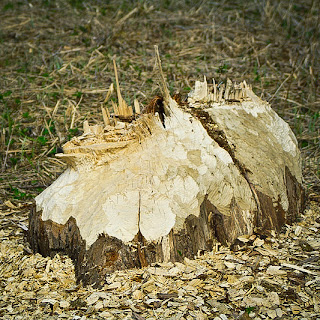 PPS Beaver castoreum (glands) dried can still be bought for $200 per kg.

The image above comes from my previous entry E- manuscripts: The Hours of Catherine of Cleves: a Wild Man (woodwose) creeps up to the rabbit and he is about get it; the rabbit hears him and looks back. I assume the rabbit escapes.
Wild Man pops up in the manuscripts here and there as a monster hairy figure living in the forest. It is not dissimilar to the contemporary myths of Bigfoot and yeti. Medieval forests, however, were bigger, denser and darker and there were indeed real and surreal dark things that dwelled  along the beasts: robbers, outcasts, hermits, spirits, trolls, boges. Pagan ritual were very much alive , just merging with Christian beliefs and fears.

The man above looks more like a naked hairy Santa, then a monster. Here a more images of very different representations.

Wild Man is both human and animalistic. It is the inferior uncivilised "other", that can also represent unfamiliar people of the other lands.


Wild Man fits well into the medieval fascination with the liminal.


A three meter wild man by Ron Mueck in Tate. 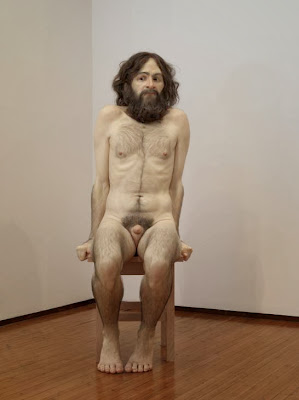 E-manuscripts: The Hours of Catherine of Cleves 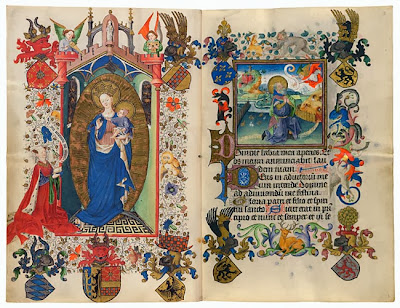 " The Hours of Catherine of Cleves is the greatest Dutch illuminated manuscript in the world"says the Morgan Library and Museum.


"This digital facsimile provides reproductions of all 157 miniatures (and facing text pages) from the Hours of Catherine of Cleves. The original one-volume prayer book had been taken apart in the nineteenth century; the leaves were shuffled and then rebound into two confusing volumes. The presentation offers the miniatures in their original, fifteenth-century sequence."

Here are a few snippets from the margins:


Below is a recording of curator Roger Wieck discussing selections from the Hours of Catherine of Cleves. 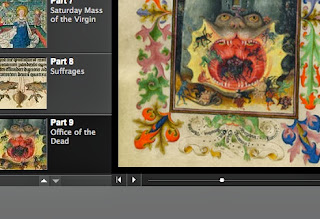