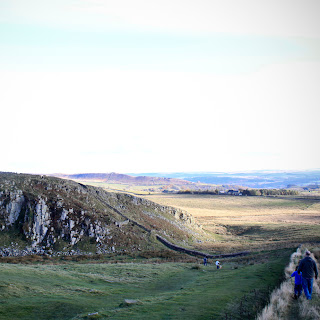 Romans didn't pull over in Essex. Rape and pillage got them to the north of England and they continued into Scotland. They did not quite like it there, however (why? no grapes?). Romans retreated back and fortified themselves by building Antonine Wall across the isle and Hadrian's Wall further south as the final northmost frontier. From one coast to another.

Vindolanda is one of the outposts just south of Hadrian's Wall. Regardless of the fact, that it sounds like a place in a computer game - it is a truly extraordinary site for anybody interested in the history of writing, the history of books, the history of media.  Waterclogged soil around the commander's residence beautifully preserved  invites and inventories, letters and shopping lists, that were thrown  out  into a heap of rubbish. Romans used thin slices (2,5mm-3mm thick, about A5 in size) of local wood as a writing base, which was inscribed using carbon based ink and then folded into half to make a letter, with the address and addressee noted on the top. The tablets contain a very wide range of subjects, most of which can be traced into modern day undertakings universally across the globe: work, money, family, drinking men, etc.