What do you think when you come to see Turner Prize 2012 and find a few coachloads of WI and a couple of vicars crowding in the ground floor lobby of Tate Britain? Great! I want to be part of their tour! This is going to be exciting! (Un)fortunately they were in for Pre-Raphaelites.
My rooms remained very satisfyingly uncrowded. 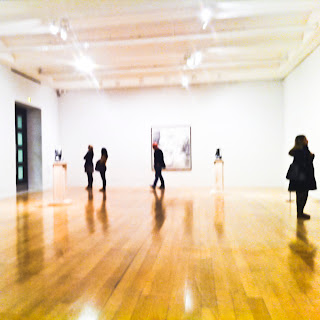 Paul Noble is in the first room: the room feels pleasantly safe as a gallery setting (good for sales). There are huge pencil drawings of pretend worlds that could almost exist in some space and some time that is distant but vaguely related to ours. I saw his Nobvile about four or five years ago in Tate as part of an excellent drawing exhibition. The city was much more human then. The spaces have expanded into an eery stillness of abandoned city: city in a perpetual state of unfinished construction (very much like our house, then). The pictures are neither exploring the limits of drawing nor setting new boundaries for contemporary art as a whole. They are detailed and skilled and their production required meditative amounts of patience. He is probably the only one in the lot who can safely be assumed not to win.

Elisabeth Price. I saw her show HERE in the Baltic earlier this year. (Yes I did!) I remember being captivated by the combination of words (very matter-of-fact), the music and the visual footage.  Especially that video about the things - spinning sculptural everyday objects sequenced to the music with her trademark bits of text to punctuate the imagery.  This signature of hers became immediately obvious as soon as I sat down in front of  The Woolworths Choir of 1979 at Tate Britain. The sound, the words. The aesthetics of the slideshow. Flicking through a book. Very detached and very engaging.

It is fascinating, that three out of four nominees are using time based mediums: film, film, performance. Luke Fowler is also supplementing his film with photographic diptychs. I did not watch the whole film, unfortunately - 90 minutes is long for a gallery viewing. I will need another trip and a better planned morning. The photographs, however,  were atmospheric and the combinations were worth a stare or two.

Another reason to return is that I missed Spartacus Chetwynd performance. The setup looks genuinely disturbing - I have found circus and puppetry scary since I had a glimpse of a horror film set in the theater. That happened at least 30 years ago. I will get back to this later. On the whole - the set up seems to strike the right kind of notes for a winning entry: definately on the boundaries of the mainstream and I haven't got a clue.

Turner prize has received a lot of beating in the last few years. I felt guilty for liking most of the show - is that  normal?