Digitised scrolls: from the Pond at Deuchar to the Trip to London

There is a well known anecdote about how Helen Douglas wanted to produce a scroll as an app to accommodate The Pond at Deuchar.  Apple refused (!)  the idea, because the app did not include any more functions than scrolling the scroll (!).

Eventually the app for this artist's book was born and the pond can be enjoyed online HERE.  It is a beautiful conversion from one medium to another, that maintains the original fluidity and depth of immersion. In fact, the experience of the digital scroll excels as submersion into the work due to the level of detail that zoom option provides.

For comparison, here are a few more digitalised scrolls (by academic institutions, mainly):

There is a phenomenal incentive from the Center for the Art of East Asia at the University of Chicago - they now uploaded online a library of digitised  Asian scroll paintings. What a resource!

The Center for the Art of East Asia initiated the Digital Scrolling Paintings Project to support the teaching of classes on East Asian painting. The temporal and spatial qualities of handscroll paintings are lost in photographs of selected sections that are reproduced in books and projected in the classroom.  Although used widely in current art education and the study of these works of art, such reproductions seriously distort the nature of handscrolls by erasing their sequential anad participatory viewing process. The display of these paintings in long cases in museums also is not the way in which these paintings were made to be experienced. With the assistance of the Humanities Computer Research Department, the Center developed a prototype for digital scrolling technology as an exciting tool to simulate the viewing experience and to improve understanding of handscroll paintings.

In 2011 Google and Israel Museum in Jerusalem uploaded the oldest known biblical manuscripts Dead Sea Scrolls online in a high-resolution format, so they become available to all everyone (with a reliable and fast internet connection, that is).

Ripley Scroll (1477) has been scanned-in as a very VERY hi-res very long photo and uploaded online: a delightful level of detail, that can otherwise be only enjoyed with a magnifying glass. In simple terms, it is an alchemical manuscript that shows in pictorial cryptograms the production of the philosopher's stone (the elusive ingredient that produces incorruptible gold out of lesser metals; and/or the elixir of life). A very detailed description of the scroll is on BibliOdyssey (among numerous other treasures that can be found there). 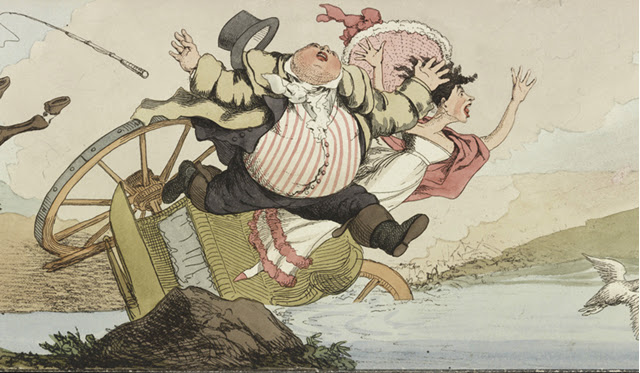 And finally, here is this charming Georgian device Trip to London that has been digitised by Princeton University. It is a box with a twelve plate scroll that contains a story about a very unfortunate  honeymoon journey to London by a recently married Mister O'Squat and the Widow Shanks.
Here is a POST from Booktryst (June, 2013) about the scroll, including this very interesting snippet of information.

It is not found in Tooley or Abbey, has no copies recorded by OCLC/KVK in institutional holdings worldwide, no copies at auction since ABPC began indexing results in 1923, no copy in the collection of the British Museum, nor is it found in the annals of our sister TV series, Divorce Court. It is an incredibly scarce item, as rare as a Taylor Swift long-term relationship.