Organic Doom of the Paper Codex


The doom of the paper codex is riding high as a subject for all sorts of librophile events in these days. The book has gone digital. Finally, there is a good solid contemporary problem in the area of books: the problem that writes in e-ink megabites and does not smell of animal glue. The number of words on the subject is growing at the speeds that were earlier thought only attainable in particle accelerators.

The problem is about get the worse. The book has not simply converted into digital in the digital world of the digital appliances. This summer the book went organic. Robert Winthrop Professor of Genetics at Harvard Medical School and his team have now encoded the whole book Regenesis: How Synthetic Biology Will Reinvent Nature and Ourselves (the text, the images and the design) into a DNR. Then they read it and copied it too. 70 billion copies of the book have been printed.  (How is that for an edition size!)

From Aug. 17 issue of the journal Science via Harvard Medical School news: 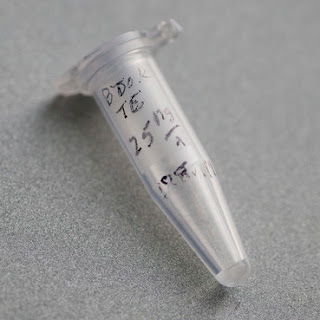 Biology’s databank, DNA has long tantalized researchers with its potential as a storage medium: fantastically dense, stable, energy efficient and proven to work over a timespan of some 3.5 billion years. While not the first project to demonstrate the potential of DNA storage, Church’s team married next-generation sequencing technology with a novel strategy to encode 1,000 times the largest amount of data previously stored in DNA.
The researchers used binary code to preserve the text, images and formatting of the book. While the scale is roughly what a 5 ¼-inch floppy disk once held, the density of the bits is nearly off the charts: 5.5 petabits, or 1 million gigabits, per cubic millimeter.
The information density and scale compare favorably with other experimental storage methods from biology and physics,” said Sri Kosuri, a senior scientist at the Wyss Institute and senior author on the paper.
And where some experimental media — like quantum holography — require incredibly cold temperatures and tremendous energy, DNA is stable at room temperature.

You can drop it wherever you want, in the desert or your backyard, and it will be there 400,000 years later,” Church said.
Reading and writing in DNA is slower than in other media, however, which makes it better suited for archival storage of massive amounts of data, rather than for quick retrieval or data processing.
Imagine that you had really cheap video recorders everywhere,” Church said. “Just paint walls with video recorders. And for the most part they just record and no one ever goes to them. But if something really good or really bad happens you want to go and scrape the wall and see what you got. So something that’s molecular is so much more energy efficient and compact that you can consider applications that were impossible before.
About four grams of DNA theoretically could store the digital data humankind creates in one year.
Although other projects have encoded data in the DNA of living bacteria, the Church team used commercial DNA microchips to create standalone DNA.
“We purposefully avoided living cells,” Church said. “In an organism, your message is a tiny fraction of the whole cell, so there’s a lot of wasted space. But more importantly, almost as soon as a DNA goes into a cell, if that DNA doesn’t earn its keep, if it isn’t evolutionarily advantageous, the cell will start mutating it, and eventually the cell will completely delete it.
In another departure, the team rejected so-called ‘shotgun sequencing,’ which reassembles long DNA sequences by identifying overlaps in short strands. Instead, they took their cue from information technology, and encoded the book in 96-bit data blocks, each with a 19-bit address to guide reassembly. Including jpeg images and HTML formatting, the code for the book required 54,898 of these data blocks, each a unique DNA sequence.
“We wanted to illustrate how the modern world is really full of zeroes and ones, not As through Zs alone,” Kosuri said.

I doubt very much if Robert Winthrop and his team considered for a minute the philosophical implications of their actions (hugely inconsiderate!) By the time the chitchat surfaces, they will be far away building an organic superlibrary as a pill.**

** Should be popular! (especially with the hummus generation of babyEinstein parents).