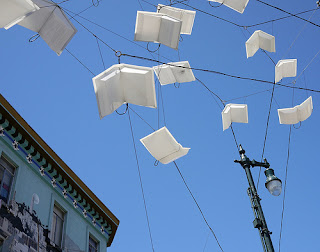 "The one thing I love about San Francisco is that you can find art in the most interesting places. It's happened when looking down randomly and seeing a really intricate tag on the ground, or looking in a corner and finding someones sticker or like the language of the birds, an art set up that has a really cool concept." Mayra L. 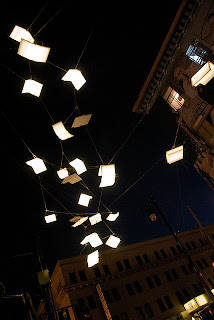 The Language of the Birds is a site-specific sculptural installation by Brian Goggin with Dorka Keehn for the public plaza on the corner of Broadway, Grant and Columbus Streets, San Francisco.

Goggin conceptualized of the piece during a residency at the Djerassi foundation. “I sat with my understanding of the site, while watching swallows move through the air, they came together to create fleeting compositions. The image of flying books emerged from the idea of culture and nature interconnecting in unexpected ways.” Influenced by the literary genre magic realism, his sculptures bring new life, movement and meaning to familiar objects .
Historically “the language of the birds” is referred to in mythology, medieval literature, and occult texts as a mystical, ideal or divine language, or a mythical or magical language used by birds to communicate with the initiated. In Kaballah, Renaissance magic, and alchemy, the language of the birds was considered a secret key to perfect knowledge.
Goggin and Keehn teamed up with scientist David Shearer and Lawrence Ferlengetti’s City lights bookstore to power Language of the Birds with solar panels mounted on top of the iconic bookstore. It is the first permanent solar-powered public art piece in the United States.

I love San Francisco too.