Some time ago I had a pleasure to see Bruno Munari's libre Illegible at Estorick Collection in London. Libre illegible contained no texts, titles or tables of content. Instead, they could only be "read" as a tactile, acoustic and visual experience. Libre illegible later became one of the key sources of inspiration for our project between one hand and another. Investigation into those illegible books has led me to uncover a world of non-textual "reading" and "writing" - visually beautiful illegible and almost-illegible pieces produced by writers, scientists, poets, artists, spies, adventurers and scribblers of all sorts: some - as a philosophical artistic investigation; some - as communication; others - as encrypted communication.

Bruno Munari himself had produced a series of works titled Scritture illeggibili di popoli sconosciuti (Illegible Writings of Unknown People), using asemic writing, based on Arabic and Chinese characters. Asemic writing implies presence of written communication. However, due to it's a-semic nature, interpretation relies on the implications drawn from visual information.


Asemic script suggests presence of written communication. It relies on apophenia - a human tendency to see meaningful patterns where they do not exist.Of course, asemic witting is created by people who have experience of reading and writing texts in their native languages - it is based on the knowledge of what a legible written communication looks like. As a result, any asemic language can only exist as a conscious reduction of that experience and unconscious imitation of the languages the writer does not understand - which probably explains, why much of European asemic writing looks like Arabic or Asian scripts.

This is not really an example of illegible writing, rather it is an example of visually beautiful writing practice from the 19th century, when it was a custom to cross-write letters in order to save paper. It look only little experience, they say, to read and write successfully in this way, learning to ignore the overlapping text.


Another 19th century example is a translation. It is produced by an Alaskan Eskimo shaman, who having converted to Christianity attempted to translate the Bible into his tribe’s native script. Biblical names are in English/Latin script -  as there was no equivalent. This page appears to be from Genesis 19, about the two angels who visited Lot, before Sodom and Gomorrah were destructed (currently at Basel Paper Mill, Museum for Paper, Writing and Printing). 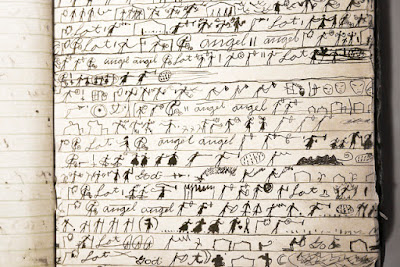 The most famous example of yet unresolved encrypted writing is Voynych Manuscript, of course. It is generally agreed that the manuscript is written in an unknown writing system. As speculations on the nature and the source of the text multiply, the manuscript remains undeciphered. It remains illegible, or - an example of a beautiful asemic writing.
A rather better story lies behind The Copiale Cipher - a mysterious 18th century document that no one could read until 2011. The Copiale Cipher describes the rituals and some of the political ideals of a German secret society in the 1730s. Bellow is an interesting extract about one of the rituals involving reading.

The master places a piece of paper in front of the candidate and orders him to put on a pair of eyeglasses. “Read,” the master commands. The candidate squints, but it’s an impossible task. The page is blank. The candidate is told not to panic; there is hope for his vision to improve. The master wipes the candidate’s eyes with a cloth and orders preparation for the surgery to commence. He selects a pair of tweezers from the table. The other members in attendance raise their candles. The master starts plucking hairs from the candidate’s eyebrow. This is a ritualistic procedure; no flesh is cut. But these are “symbolic actions out of which none are without meaning,” the master assures the candidate. The candidate places his hand on the master’s amulet. Try reading again, the master says, replacing the first page with another. This page is filled with handwritten text. Congratulations, brother, the members say. Now you can see.


Every language is an example of encrypted communication: the message only makes sense to those who have the keys to decoding, those being vocabulary and grammar. Until we have the keys, the writing remains asemic to the individual reader: writing remains a drawing with a potential to be decoded.

Such as this Japanese calligraphy is to me.