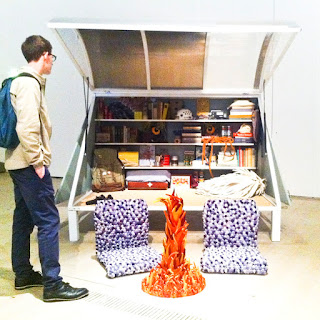 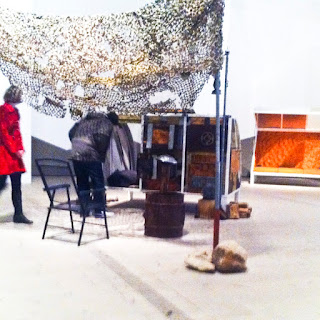 Loved it. A truly harmonious blur of art and design. An utopian fantasy of customized pods and furniture placed in an idealistic world of hippiesVSpioneersVSFarenheit451film in felted uniforms.


Here is an interesting interview  with her on the subject of art-craft-design:

Andrea Zittel is a contemporary artist living in the high desert of California. Her work blurs the line between art and everyday life. With a slightly distopic and fantastic view of existence she has done things like breed chickens, make modular living environments and create a 44-ton floating island off the coast of Denmark. She graciously let SuperNaturale interview her about her work, her thoughts about art versus craft and her deep love of felting.

Andrea Zittel:
It’s interesting to be doing this interview with you for SuperNaturale right now, because after years of working in the margins between design and art - now I’m working on a trinity to combine design, craft and art.

Since graduate school I’ve been interested in the idea of craft. But every time I brought it up in school people would discourage it. Craft is sort of a scary area for a lot of artists. So I’ve been trying to think about why there is this prejudice against craft – and have realized that it is primarily seen as a regressive gesture. So the question that follows this is: how can craft, in some way, become progressive? Or another approach is to think about how it can actually be made relevant to a contemporary lifestyle.

And do you mean the making or the having?
In my mind it’s more about making it. For me the definition of craft is that it is an individual form of production as opposed to mass production, and also that a crafted item usually be made by the same person who would wind up using it.

If craft is individual production, what is the difference between art and craft?
Well that similarity is probably what scares most artists. But for me the function of art is more to do with facilitating new forms of perception. Art helps us to perceive things in a different way. Then I see design as a pursuit to shape the way that these things look and function in a more practical sense... and craft delves into production and the way in which they are made. I think that all three areas can be components of a single object – in fact, perhaps we should always be thinking about this trilogy when we bring a new object into the world.

So craft can be the process by which you arrive at art.
It can be part of the process, but I feel that it hasn’t been an important part of artistic production for a while now. The thing is that after several decades of artists challenging the conventions of authorship by not producing their own work, it has now become the hallmark of an important artist to have a large crew of fabricators who make their work for them.

It seems to me that there is a gap there somehow--presumably when most artists are starting out they would need to do it themselves, and contracting it out would be a bit of a leap.
There are some artists who do that DIY thing really well but when I follow a lot of younger artists I see that when many of them start showing, they immediately aspire to start working with assistants and studios. Personally I find it really stressful to work with assistants and until this last year I never had a studio...

So it sounds to me like you have been crafting since art school, that you have always been very involved in the making of your art.
Sure. And I paid my way through art school by doing bronze casting and welding and woodworking for other artists - so I’m pretty good at doing those things even though it hasn’t been part of the content of my work.

I find making things for myself enormously empowering and I have this intuitive feeling that craft could still be really important in people’s lives. All of my work keeps coming back to the idea of individual empowerment. Like when I made design it was very much anti-design, and anti-architecture, it was more about how to be an empowered consumer and to be your own ultimate authority. So with craft there’s another form of this idea that you can be doing things for yourself.

Have you always made your own clothes, or have you ever had them made?
Well, in the early 90’s when I was wearing 6-month uniforms, I would have a tailor make them because I wanted them to be really perfect and I don’t sew that well. But the Personal Panels and Crocheted Dresses I make myself. I’m better at crocheting and felting than at sewing.

Here is the text from the exhibition brochure:


Lay of My Land
10 February 2012 - 20 May 2012
Born in California in 1965, Andrea Zittel’s projects are rooted in everyday life. In 1999 she moved to the Mojave Desert with the idea of leading an experimental life and established A-Z West, a site that encompasses all aspects of daily living as ‘an ongoing endeavor to better understand human nature and the social construction of needs.’ At A-Z West routine activities such as sleeping, eating, cooking and socialising become artistic actions. For over two decades Zittel’s experiments here have included dressing in the same home-sewn uniform for months on end, living on an artificial island and living without measured time. She is best known for her ‘living systems’ that explore the fundamental elements of human survival. A-Z West consists of six gradually acquired parcels of land. It is located in an area where, from the 1940s to the early 1970s, the US Government gave people five acres of land under the Homestead Act as long as they could improve it by constructing an inhabitable structure. Today, the result is a seemingly infinite grid system of dirt roads and tiny, largely abandoned, shacks.
Crochet
Zittel’s crochet works explore one of the fundamental principles of her practice: the possibility of freedom born from limitations. Each work is based on a specific self-imposed rule system that dictates the final form. Clasp 2010 was made by making ninety-degree turns and three stitches in any given corner. The Bodily Experience of a Physical Impracticality 2010 is a starburst of incremental units. The works have a contrasting relationship. Clasp holds like an embrace while The Bodily Experience of a Physical Impracticality evokes the body moving through space and is reconfigured each time it is shown.
Raugh Sculpture
The Raugh (raw/rough) liveable sculptures are furniture modules that were also developed from the idea of freedom within limitation. Like Zittel’s crochet, these objects are built with strict organising criteria. The Raugh system plays with the idea of natural order. Zittel believes that things belong most naturally in the environment in which you place them. She sees the Raugh Bookshelf 2006 as an ‘energetic accumulator’ that sucks life onto its surface. The Raugh sculptures adapt to domestic disorder and to the accumulation of dirt. The user is central to the functionality of the work and the customisation of the basic modules is an integral part of the process.
Wall Sprawls
The Wall Sprawl works are created using satellite images of uninhabited land that is starting to be developed. The images reveal the cultural context of the American Southwest and challenge the popular notion of the desert as a wilderness. The reality is a rapidly developing, complex and politicised space – its resources are exploited by the US Military and it has the fastest growing population in the United States. Wall Sprawl #2 (Las Vegas between Enterprise and Henderson) 2011 draws attention to the fringe areas that lie between the desert and large-scale development. Its pattern reveals different time periods, agendas and economic systems: expensive developments have organic forms, while cheaper developments follow rigid grid patterns. The use of repeated patterns, tiling and mirroring in the work echoes the sense of never-ending sprawl.
Lay of My Land
In contrast to the Wall Sprawls, Lay of My Land 2011 emphasises the fact that the landscape has been divided into arbitrary sections and reveals a collision between natural geography and man-made systems. Here, Zittel focuses on the concept of the parcel map, which superimposes a man-made system of measurement and distribution onto the land. In practical terms, this historical process of division means that Zittel is not permitted to build across the boundaries between adjacent parcels of her own land. Zittel’s house, studios and a number of Wagon Stations are visible in the topography of this work.
Wagon Stations
The Wagon Stations have sat on one of the six parcels at A-Z West for eight years. Close to destruction by the elements and the hostile desert environment, they have been relocated to a gallery setting at the end of their functional lives. The units were developed as part of Zittel’s High Desert Test Sites project to accommodate visiting artists. A station wagon was the smallest thing Zittel could imagine safely sleeping in; the Wagon Stations developed from this idea. It had to be possible
for the structures to both withstand the elements and be small enough to be built without the need for permits. These requirements and restrictions have informed their design – the curved shape and leg supports allow the wind to move around them and their size is just sufficient for two people to sleep inside. They can also be locked and secured. The Wagon Stations offer a limited space that allows the bare essentials for living. Zittel wanted to experiment with living systems that could be left open for modification and customisation by those that inhabited them. All of the units in this exhibition have been customised by the people who used them and made them their personal space over time.